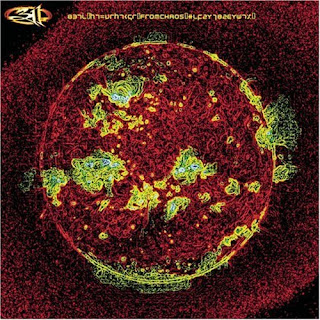 This album will always remind me of the day that my mom, my sister, and I went to my college for Orientation. It was the middle of the summer of 2001 and I hung out by the pool listening to this album (and Sugar Ray's self-titled album) at our hotel while my mom and sister played in the pool. Looking back, I wish that I'd gone and played with my little sister, but I was 18 and she was 7, and that's just how things like this work, sometimes.

This album was a little more pop friendly than the other album I had heard at the time (1995's self-titled, breakthrough album) and I think it just coheres a little more. The songs are more varied and, for some reason that makes it more of a satisfying album to me.

Here's a video for the first single, but I don't think I ever saw it at the time because I feel like I would have remembered a video with Shaq in it.

And, I could have played one of a couple of the slower songs like "Amber" or "I'll Be Here Awhile" but instead, here's the song that really cemented my love for this album. I think it's just the steady flow of Nick Hexum's voice that draws me into this song time and time again. It's like a bullet train that barrels into you and just keeps going until the end.

You can buy From Chaos at Amazon, Amazon MP3, and iTunes
Posted by James! at 12:00 PM