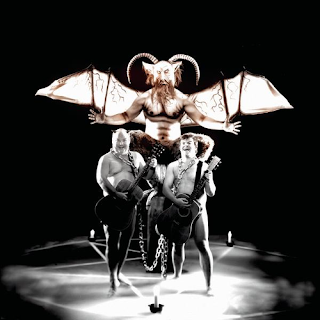 I remember the day I bought this album. I was a freshman in college and the plan was this. My girlfriend and I would go to the clinic and get whatever immunizations I was supposed to get and then we'd go to the mall. That was the first time I ever passed out on a nurse (I was supposed to have some sort of food before getting the shot!).

So then we went to the mall and I bought this album. I had been introduced to the Tenacious D HBO show when I visited my cousin at her college the previous spring and I loved it. So I was super stoked to make this purchase....and super disappointed when I found out that it included instrumentation other than just the twin acoustic fury of JB and KG.

And then I got over it.

This album is an album about rockin'. And fuckin'. And rockin' some more. It's a weird album because it is done almost entirely tongue-in-cheek, but somehow manages to actually rock as hard as it claims to. You're laughing when you hear Jack Black sing his songs about writing the greatest song in the world and then forgetting exactly how it went (Yeah. The D did it 12 YEARS ago, One Direction.), or about the time Kyle Quit the Band.

The sketches work. And the songs work. This album is 21 tracks of joyous, fist-pumping, raunchy rock. I can't play this album without cranking it and singing along at the top of my lungs.

Here's a prime example of the kind of rockin', graphically sexual, and amazing songs that are on this album and, if I'm not very much mistaken, one of the songs that I saw on the HBO show that really sealed my love for this band.

And here's a song that you might have heard at the time. It was fairly popular around campus. It contains one of my favorite bits (the part about telekinesis).

And finally, here's the video to the song I was talking about One Direction ripping off before (by the way, the One Direction song is called "Best Song Ever" and it's basically the same idea as below)

I'll leave you with one of my favorite sketches on the album. This is one I think of pretty much any time I'm giving my order at a fast food place.

You can buy Tenacious D at Amazon, Amazon MP3, and iTunes.
You can find all the episodes of the TV show on the Complete Masterworks DVD (Amazon)
Posted by James! at 12:00 PM