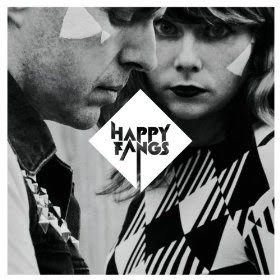 I guess the first thing I want to say about the eponymous debut EP of Happy Fangs is that it is EXACTLY what I was hoping it would be.

I've talked about them a little bit over the last year and finally, on October 1st, they will be releasing Happy Fangs which will show the world exactly what comes from a collaboration between Rebecca  from My First Earthquake and Michael Cobra from King Loses Crown.

Happy Fangs is loud and dancey and just wonderful. I had an inkling that it might be from "The Truth" and "Lion Inside You" which the band had already released (Watch the video for the latter song below. And crank it.)


I know I started this by saying that they met my expectations, but that's not exactly true. This EP goes way beyond my expectations. I was actually a little worried that the pop element that I enjoyed so much in MFE was going to be drowned out by guitars. Instead the guitars serve as a spaceship to blast the effect into hyperspace.

The last 45 seconds of "Perk Up" illustrate my point better than any words could.

Remember in The Princess Bride when Westley is dueling with Inigo Montoya and they both admit that they're stronger swordsmen than they let on at the outset of the duel?

No? Well, let me refresh your memory.


Ok, so that's what happens at the end of "Perk Up". The band is playing a perfectly wonderful song and then, BOOM they both switch hands and you realize that they've been toying with you this whole time. And you don't care. Because you're too busy dancing your ass off.

Happy Fangs comes out on October 1st.
It looks like their website is going to be the place to get it
Amazon MP3 also has a page up for when it comes out

OH! If you're going to the CMJ festival up in New York (Is it just in Brooklyn?), Happy Fangs will be playing Sat, Oct 19 at Trash Bar in Williamsburg. They didn't know what time they would be playing when I talked to them, but that will probably be sorted as the date approaches. Go. See. Them.