So, it seemed like everyone at work today was just having a REALLY rough day. Except me. I had a fairly laidback/stress-free day. That always seems to happen. Maybe it's just that my day didn't suck as much as the days of the people around me, so it seems like I had a good one. I dunno. Has anyone else experienced this?

Speaking of experience, I'd like to refer back to my post about eBay. Nat left me a comment and said that she had stopped using eBay because she kept having issues with not getting what she paid for. Something similar has happened to me. Only it's worse! I paid for something that was clearly advertised as not the thing I was looking for. Basically, it was this Smashing Pumpkins single, for Ava Adore. But instead of having the 2 B-sides (which, let's face it, is what I'm really looking for), it had two "Call Out Research Hooks". Now I haven't listened to these, but they're definitely not what I wanted to end up with. And the bad thing is that it's exactly what the seller posted. I just didn't pay enough attention. Sigh. Oh well. We pay for our mistakes. And, really, it's not that big a deal, in the long run.

I think I'm going to go to bed now. I had KIND OF planned on posting about the Oscars, but I think I might save that for the weekend. Or maybe you'll NEVER hear my personal opinions on that topic. Ok, ok. Stop crying. I can't promise to try. But I'll try to try. :)
Posted by James! at 10:15 PM 1 comment: 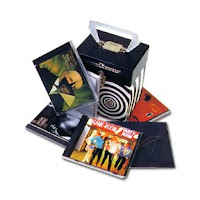 So, I think The Smashing Pumpkins (or just Smashing Pumpkins, if you prefer, which I do) are probably my favorite band. There are lots of bands that have made 2nd place, but I've liked SP longer than any non-Beatles band and I feel like they've made diverse enough music that I can listen to them in lots of moods. Also, I feel like saying "The Beatles" as your favorite band is kind of a cop-out. Maybe this is me being...something, but yeah. The Beatles are sort of not even in the running for the category. What do you think?
Anyways, I've been getting a bunch of Smashing Pumpkins stuff on eBay and that includes the The Aeroplane Flies High box set pictured above. This set has all the singles from Mellon Collie and the Infinite Sadness with all the songs that any of the singles were released with. So, lots of songs from a really great era of the band. I'm very pleased to have it sitting right next to me here.
In other news, I'm not going to be contributing to the Contrast Podcast this week (Theme: Ice Cream) but I have been working on my mix to send for the Contrast Podcast CD Exchange. Very exciting. I don't think she reads this blog, but I hope the person who's getting my mix will enjoy it! I'll be sure to post about the CD I get when I get it.
Have a great week everyone!
Posted by James! at 7:00 PM 1 comment:

My Mom: A Future in Picking AOY's? Plus: Blood-sucking parasites

So, first off, because Gmail's news ticker ruined it for me this afternoon:

SPOILER ALERT (albeit 48-hour old Award Show Spoiler): DON'T READ IF YOU DON'T KNOW ABOUT WHO WON THE ALBUM OF THE YEAR GRAMMY AND YOU CARE ABOUT WATCHING THE SHOW BECAUSE YOU DVR'D IT AND YOU DON'T WANT MY PAGE TO BE LIKE GMAIL AND GIVE AWAY THE ENDING!! (this spoiler alert brought to you by "Things only James would bother worrying about/typing 4 lines in all Caps". A family company.)

So, I guess my mom's tastes in music jive more smoothly with what the Academy the picks the Grammy winners listens to. Herbie Hancock's Joni Mitchell Tribute (River: The Joni Letters) beat out Kanye, Amy Winehouse, AND Foo Fighters for Album of the Year (Vince Gill was also nominated, but, as far as I know, niether my mom nor I listen to Vince Gill. (Though he did strike quite the charming figure when he said that thing to Kanye: "I just got an award from a Beatle. Have you done that yet, Kanye?" It was cool because obviously there's no beef there and it can be a funny thing to have celebs talking trash.)) I read an article that figured that Winehouse and KWest split the "young, Pop-centric members of the Academy" in half and opened the door for Herbie.

I mean, good for him! And I did tell my wife back when the nominees were announced that I hoped Herbie would win, because then Kanye would have to find a new card to play, if you know what I mean. (PS, I love this guy, despite, or maybe BECAUSE OF his drama queen antics. He feels real.)

In other news, if there's anyone out there who listens to Brad Paisley AND reads this blog, can you comment and defend this guy for that song he played? Here are the lyrics. They were pretty good until the part that you're about to read and go "WHAT?!":

and find a place to park

CHORUS:
cause id like to see you out in the moonlight
id like to kiss you way back in the sticks
id like to walk you through a field of wildflowers
and id like to check you for ticks

oh id sure like to check you for ticks

Yeah. THOSE lyrics. I almost couldn't believe my ears. Is that sexy? Does it make all the women nostalgic and wistful for those times when they were romping through the high grass and then they had to have that special boy make sure there were no parasites on them, lest they possibly contract lyme disease?

I'm watching the Grammys right now. And George Martin is standing up on stage. It's all very good. I know that these award shows shouldn't be so enjoyable to me, but they are. I just love the competition.

Also, I'm not sure if I've mentioned this on this blog, but I have a, well, I guess you'd call it a life goal. I have vowed to make sure that I've heard every Album of the Year, read every Pulitzer for Fiction, and seen every Best Picture from the year of my birth forward. So the Grammys and Oscars are especially exciting for those awards! I'm most behind on the Best Pictures, but I feel like that's because it's the medium that requires the most prolonged deviotion of attention. An album you can listen to in the car and a book is a personal thing that you can stop/start at your liesure, but a movie is 2+ hours (I've found that the "+" is generally true for the Best Picture winners) of watching a screen, and I personally like to watch movies with my wife so, yeah. That's my excuse! Not that I need one. But there it is.

I realized this weekend that being comp'ed for my power cord means that it's a distinct possibility that I could go off Seagate's radar and never see this cord at all. I've sent them another email, but man. I'm starting to go through serious withdrawal here, people. Is it going to become necessary to RE-rip all my CD's? What about the songs I've gotten off iTunes? Arrrgh!

Other than that I had very good Wii-kend. :) Yes, we got a Wii on Thursday and we spent most of the weekend playing. The Simpsons game is very fun. But WarioWare is just amazing in it's odd-ness. Love it.

Man, Tina Turner is looking pretty rough. But she's still a great performer and definitely almost keeping up with Beyonce. I mean, did I just type the name Beyonce in my blog? (Twice?!) Phew. Ok y'all. Have a great week. I'm going to power through this lack of music and never let 16 (or whatever it was) go by before posting again.
Posted by James! at 10:18 PM No comments: