New Countdown: I have GOT to start doing these earlier :)

Man, it is so late and there wasn't a lot of movement on the chart. I still think we pulled off an enjoyable show, though. Who's "we"? Me and Billboard? I guess. ANYwho, I'm clearly talking to myself and coming off as insane, so I'll see you next week when hopefully it's not as late and there's some more movement to talk about :)

***Featuring***
Capital Cities
Fall Out Boy
Imagine Dragons
The Lumineers
Muse
My Brightest Diamond
The Neighbourhood
New Politics
Of Monsters and Men
Radiohead
Thirty Seconds to Mars
Posted by James! at 10:00 AM No comments:

New Countdown From the Road

I am writing this from Room 201 of the Best Western in Harrisonburg. I have driven down here with my wife to attend the wedding of a dear, dear college friend and now I'm going to write this post and watch Veronica Mars for the rest of the night!

I really kick the Radiohead flashbacks into overdrive on this one :)

So, this week has been an absolute train wreck. Lots of things going on and work and all of that. So, I have been unable to record a new podcast (beyond the first intro, which I do on Wednesday nights) for this week. BUT all is not lost. I have a guest review that my friend Andy (from RVA Playlist) sent me and I'm going to post a Radiohead music video, so that we can at least feature another aspect to OK Computer this week.

Alex Clare- Too Close
Even after listening to this song for half a year. I still feel like it's two songs that mesh into one. It's starts off as a nice dark pop song, but then goes into the hard synth rock and I don't think it meshes well.

AWOLNATION - Kill Your Heroes
It has a beat and you can dance to it. If you have no shame. I have no shame and am now dancing.

The Black Keys - Little Black Submarines
I really like this song. It's so soft and melancholy.  Then the 1:00 minute mark hits and we're treated to fun and raucous rock song. This does not disappoint.

Green Day - Oh Love
While I love Green Day, I stopped paying attention to them after "21st Century Breakdown." I had completely forgotten they were releasing 3 albums in a row in 2012 and this song sounds a lot of what I've expected from the group. Very pop-friendly rock. I personally want to see a return to albums like "Insomniac."

Imagine Dragons - It's Time
I really like this song and I feel like it completely came out of nowhere. Very upbeat and fun. And I totally thought their name was Magic Dragons when I first heard them. I really liked that name.

Linkin Park - Burn It Down
Linkin Park doing what they do best. Be loud and synth-rock-y.

The Lumineers - Ho Hey
I am so tired of the Lumineers right now. This song needs to not be played anymore.

Mumford & Sons - I Will Wait
This song got me into Mumford & Sons. Yes, I missed the boat when "Little Lion Man" came out and everyone went all crazy for them. I really enjoy this song. It's simple but very good. And the "raise my hands" part gets me every time.

Muse - Madness
This one grew on me. I like Muse but wasn't feeling this song at first. Each listen made it more enjoyable.

The Offspring - Days Go By
Listening to the Offspring always makes me smile. They’ve been my favorite band since high school and I remember the days were I would fall asleep listening to every album they had on my CD Walkman. While I like “Days Go By,” there are so many better songs on the album I wish they had gone with. And while they don’t really do anything new, it does manage to invoke the history and style of every one of their albums since 1989. And yes, I know every single song they’ve done by heart.

Passion Pit - Take A Walk
I like this song but I hate the chorus. The "take a walk" part gets on my nerves every time.

The Shins - Simple Song
I have a love/hate relationship with the Shins. Ever time we played the Pandora station at work, whatever artist we chose to play, it would always, ALWAYS, play the Shins. It never failed. It got to a point where I couldn’t listen anymore because I was so tired with the Shins. And then they had to release a new album – and a great one at that. After this album came out, we started listening to it constantly and once again, the Shins were back in our musical lives at work. "Simple Song" is still my favorite off the album.

Walk the Moon - Anna Sun
This song just gets me in a good mood. I'm always pumped when I listen to this. Put this in your "get ready for the day" mix.

Youngblood Hawke - We Come Running
Why was this song not played more often last year? A catchy sing-along chorus and a whole bunch of whoa-oa-oa's? This has pop hit written all over it.
Posted by James! at 10:00 AM No comments:

So I was just looking for the latest episode of P.O.S is Ruining the Current (Which doesn't appear to have an episode from last Saturday...at least nothing archived yet.) and I found that P.O.S has a tumblr. No big surprise there, but I found two things I want to share with you from it.

The first, is this remix of "Piano Hits" from his latest album We Don't Even Live Here which is apparently "the first taste of Marijuana Deathsquads’ upcoming remix album of P.O.S’s We Don’t Don’t Even Live Here, entitled 'POS WDELH MDS RMX' " which is a very exciting prospect. I love when a remix completely changes the flavor and feel of a song


The second thing I wanted share is this picture. I haven't seen it posted anywhere else and I think it is so great. It's P.O.S pushing Dessa on a swing and they're both clearly having a blast! 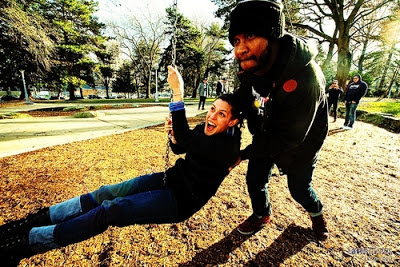 I'm pretty excited that this song has finally broken into the Top Ten. It's a dance song in the 80's/90's tradition as opposed to, for instance, the song I played last week. By that, I suppose I mean that it is a little less worried with "looking cool" and a little more into having a good time. You could make the claim that it's repetitive or mindless, but I think it is just so so so fun. I think it looks like they're both having a good time.

Oh, and my theory is that neither of them actually sing on the track. They construct the track and then the voice you hear singing is that of Charlie XCX. But I would love confirmation of this. So I want to focus a little more on these Alternative Album Grammy Winners that I'm playing for bonus songs on the Countdown. So I think, on the first Monday of every month, I'm going to do a little retrospective poll related to the album from the proceeding month.

Please answer the following questions in the comments section. (If you don't have an answer, feel free to skip the question)

1. What is your favorite track on Odelay? (cool! i can embed the whole album!)

2. What is your favorite Beck album?

I'm getting this post in JUST under the wire because we mopped the kitchen floor last night and my laptop was still in the kitchen. I could have gotten it, but, c'mon guys, it was late. And I have like 45 minutes to spare. In fact, if I hadn't told you, you never would have known how close to the airtime I'm writing this!....So just act like I didn't say anything....

Oh and we have a new Grammy Alternative Album of the Month to coincide with the new month! I bet you're pretty stoked to find out what it is, so I played that song first!

***Featuring***
Capital Cities
Fall Out Boy
Imagine Dragons
The Lumineers
Mumford and Sons
Muse
The Neighbourhood
Of Monsters and Men
Radiohead
Thirty Seconds to Mars
Posted by James! at 10:00 AM 2 comments: