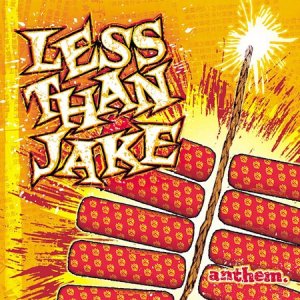 If you had asked me before I actually went through the rigors of figuring out which album from each band I was taking with me to this very lenient desert island, I would have said that, for Less Than Jake, Hello Rockview is almost a no-brainer. It contains a song that I waited 8 years to hear LTJ play ("Scott Farcas Takes It On the Chin") and it has more songs that I would consider "classic" Less Than Jake.

But instead we find ourselves with Anthem. And I think the reason why this seemed a better option for the Desert Island (which I know is not really a part of the exercise anymore and I haven't mentioned it since the intro) is because, unlike the songs on HR, this album has variety. And lyrics that aren't the same 4 lines repeated with a couple of chorus in between.

These songs have range. And if this album finds LTJ drifting a little more towards the poppy side than purists would like, well, that also fits my MO for albums that I chose for this list.

But I mean really, watch this video and tell me this wouldn't be a song that would make your "Beach Playlist" on the ol' DI.

By the way, I was going to play the video for "She's Gonna Break Soon" which stars the very alluring Alexis Bledel but whoever made the video decided that he/she didn't want the horns of that song to be in the mix for the video. So you see LTJ performing. You see the horn section, but you don't hear any horns on the track that plays for the video. Which is a shame.

Here are a couple of tracks from the early middle of the album. Please note the variety. And also note how the title of the second song is somehow ABSOLUTELY PERFECT for the song it's titling, even though it's never uttered in the song itself.

You can buy Anthem at Amazon, Amazon MP3, or iTunes
Posted by James! at 12:00 PM