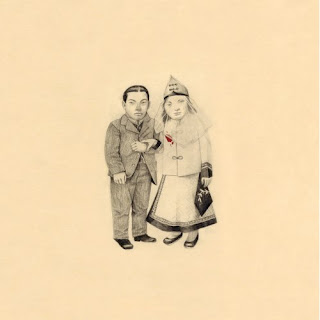 The Decemberists The Crane Wife, 2006

I've started to really note the albums that are paired together in a given week. Sometimes they're right in the same section of the record store. And sometimes, as is the case with The Blueprint and The Crane Wife, they're not.

But maybe they SHOULD be. Or at least closer than we'd assume. Think about it. One of the albums featured this week has violent gang fights, kidnapping/murder tales, and a boastful recounting of a successful heist. And the other one is the Jay-Z album.

Actually, The Crane Wife is more violent by a good distance.

But it's so SOOTHING. I love drifting away to Colin Meloy's voice. This is an album that you can put on and then be VERY surprised when it's already over. It's not short. It's just transporting. The music is a wonderful blend of prog and folk and the stories are compelling and varied.

If I might blaspheme a little, it feels like the perfect combination of Bob Dylan, Pink Floyd, and Boston.

If you're still reading, you're in for a treat. I can't believe I found this and that I haven't seen it featured anywhere before. Here is the complete title track (which, on the album, is broken into two tracks, Parts 1 & 2, and Part 3), in order (Part 3 appears as the first track on the album and Parts 1 & 2 appear as track 9.) performed by Mr. Meloy for KEXP:


And here is that heist song I talked about earlier, just to prove that The Decemberists are not completely powerless on the dance floor.

The Decemberists - The Perfect Crime #2

You can buy The Crane Wife at Amazon, Amazon MP3, and iTunes.
Posted by James! at 12:00 PM