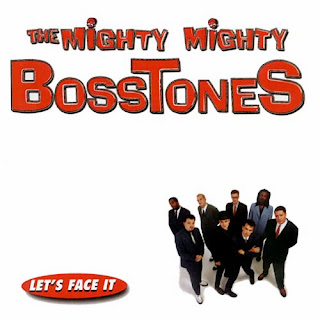 It's funny to think about this album from almost 17 years later. This was almost my first ska album (Tragic Kingdom would have come shortly before it) and at the time, it seemed like this was music from another planet. Now I see that this was a fairly straightforward effort that somehow caught the ear of a more mainstream crowd than usual, with "The Impression That I Get", if not dominating the radio, at least making a dent.

It's a great album, though, despite the conventionality. From the snare that counts in "Noise Brigade" to the group singalong/party that wraps up the party, this album runs the gamut from easy going to hard driving and still sounds as awesome today as it did back then.

And the messages are still VERY relevant. The title track (dubbed "Preachy" by AV Club columnist and future NPR golden child Stephen Thompson) is basically a ska call for equality among ALL people. Again, not a new concept for the genre, but still nice to hear.

One of my memories of this album is that it was one that was reviewed by Focus on the Family back when my Mom got their weekly bulletin. The Internet being a wonderful thing, here it is:

Strong anti-drug lyrics are central to "Royal Oil" ("When you smoke or poke the poison, you lose the chance to be tomorrow"). "Nevermind Me" finds the victim of a holdup mourning for the drug addict who robbed him. Gang violence leads to murder, which leads to prison on the cautionary tale, "Numbered Days." Fed up with society's scandals and lies, "Desensitized" longs for truth. "Noise Brigade" values higher education and learning a trade. The title song condemns racial hatred, sexism and bigotry . . .

. . . But it also seems to sanction homosexuality by urging listeners to tolerate others' "preferences." "That Bug Bit Me" includes one use of the s-word. "Another Drinkin' Song" condemns drunkenness, but only after a first-person diatribe that seems to revere it.

This band has a good heart. Sadly, its lyrical execution leaves something to be desired. Not a terrible disc, but The Insyderz or The Supertones are better ska options.
(http://www.pluggedin.com/music/albums/2002/mightymightybosstones-letsfaceit.aspx)

(Quick aside related to the "Summary Advisory" section: as far as Christian ska bands go, the aforementioned bands are quite nice. I like The Insyderz Skalleluia! album and The Supertones Chase the Sun album, but neither stacks up to this, lyrically or musically. I wish that they'd suggested Five Iron Frenzy's Upbeats and Beatdowns, instead. They would have been repping fellow Coloradans and I've always enjoyed FIF's sound more than the other two bands)

It struck me as odd at the time that they had to make the distinction between what kinds of tolerance were commendable and what kinds were something to warn parents about. And I think that was a watershed moment for me. Realizing that some organizations could take wonderful messages and turn them on their heads. "Let's Face It" remains one of my favorite songs on the album, and one reason for that is that it stuck in the craw of a group like that.


Another nice thing to come out of revisiting this album nearly two decades later is that a song like "Another Drinkin' Song" connects a lot more cleanly with me. When I was hearing this for the first time, I was hearing it with a very judgy set of ears on either side of a brain that wasn't QUITE ready for the complexity of the content of the song. And so I labelled it "the skippable track".  But this song, rather like "Alcohol" on the Barenaked Ladies' Stunt album is catchy and thoughtful and a lot of fun, even if I still can't personally relate to the character's specific vice. I can substitute my own! That's the great thing about vices. They're very malleable.

But when you listen to this one, the key change is the thing to pay attention to. Watch how it completely changes the tone and vibe and flavor of the song. It's like someone took a rag and wiped the grime off the window just in time for a gorgeous sunset.

You can buy Let's Face It at Amazon, Amazon MP3, and iTunes