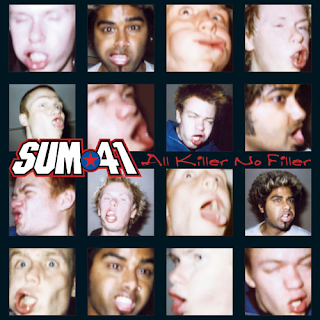 Senior year of High School, there was an exchange student from Scotland named Douglas. By the spring, the Drama department had made him one of our own. He remains one of the coolest people I've met.

For some reason, I was at his host family's house waiting for him to get ready and watching MuchMusic (Canadian Music Television). The performance that I was watching was mesmerizing. It was a pop-punk band which I was already on board with, but in the middle of their song, the drummer started trading rap lines with the singer. I had never seen anything like it before and honestly haven't really seen anything like it since.

The band was, of course, Sum 41 (wouldn't it be weird if it wasn't and I was just randomly telling you this story?) and the song was "Fat Lip", the song that made them blow up in America. It came from today's featured album, All Killer No Filler (which I would later discover was originally the title of a Jerry Lee Lewis album (his nickname was "Killer" because, and I'm not checking my sources on this, he accidentally shot someone in his youth)),

I was listening to this album this morning and was realizing how similar to my experience with Barenaked Ladies was to my experience with Sum 41 was. And also how different. Both Canadian bands with rap in their breakthrough hit, but not really a thing that was a part of most of their music. The difference was that I was already a fan of the kind of music that Sum 41 mostly played, so it wasn't a hard transition when I realized that "Fat Lip" wasn't typical Sum 41 fare. With Barenaked Ladies, the transition from "cool folky wrap group" to "talented introspective songwriting band" was too much for me 3 years earlier.

This album holds up today and almost has a classic feel to me. The video for "In Too Deep" remains one of my favorites and I hadn't even seen the movie Back to School when I saw it for the first time. Something about a flashy guitar solo played while rising slowly out of a pool will always get me.

I decided not to feature "Fat Lip". Odds are, you've heard it. And I wanted to play some lesser known songs from the album that I love. So here they are!
Sum 41 - Rhythms
Sum 41 - Heart Attack

You can buy All Killer No Filler at Amazon, Amazon MP3, and iTunes
Posted by James! at 12:00 PM