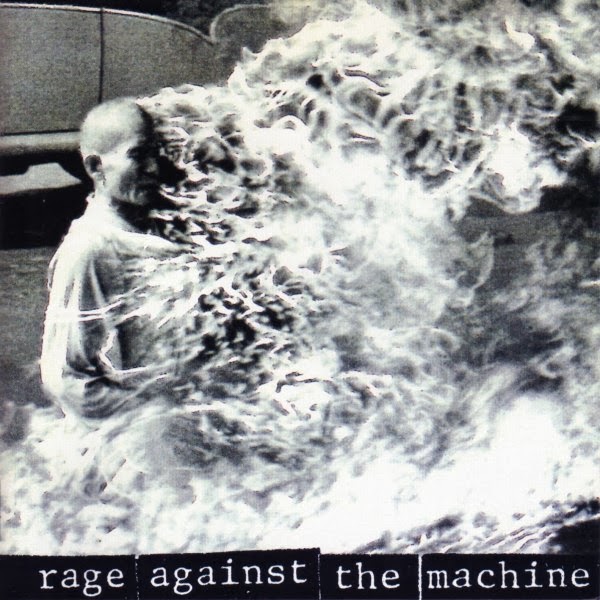 First of all, don't for a second think that I was cool enough in 1992 to have this album. I was very much not.

No, I first encountered Rage through the singles from their second album, Evil Empire: "People of the Sun" and "Bulls on Parade".

I guess maybe it was the fact that "Wake Up" was on the end of The Matrix, or that I really enjoyed their song on the Godzilla soundtrack (hell of a soundtrack, by the way.), but somehow I discovered this, their debut album. And it made everything else I'd heard fade slightly in comparison.

You can tell that they're really working through the sound that they're going for with this band. The "rap" songs are very neatly delineated from the "rock" songs in a way that wouldn't be as clear on subsequent albums.

The message is also clearer and louder. Perfect example: If the end of "Killing In the Name Of" (the "fuck you. i won't do what you tell me" part) doesn't make you want to at least throw an aluminum can into the "Plastic Only" recycle bin, then you need to crank the volume a little louder. It might be sacrilege to say, but this album has the sound that I always think I'm going to get from Public Enemy and never do. (The reason for this is simple: PE is an obvious influence)

This is the kind of music that I pray kids are still finding today. Loud, angry, rebellious music with a message about thinking for yourself and questioning authority.

And I haven't even gone INTO the album cover yet. This is, after the aforementioned Rancid album, my second favorite album cover. It's violent and iconic, but also somehow serene.

Rage Against the Machine - Know Your Enemy

You can buy Rage Against the Machine at Amazon, Amazon MP3, iTunes
Posted by James! at 12:00 PM

Labels: 1Y100A, Rage Against the Machine