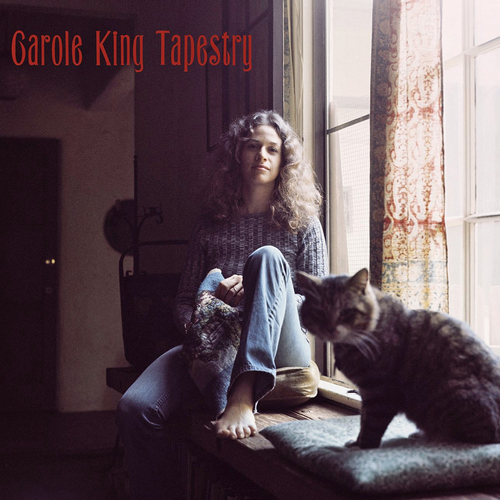 For me, this album is Saturday mornings in the 70's. Now, I wasn't alive in the 70's, so this feeling isn't based on anything in reality, but it happens every time. Maybe it's because my mom has this album on vinyl, or maybe I've seen a commercial or something that had this music (or similar music) in it and took place on a 1970's Saturday morning. Who knows?

All I know is that this album is practically a greatest hits album. Without looking up the exact story, the story goes like this: James Taylor convinced Carole King that she should record an album of her singing her own songs. These songs had been made famous by the Shirelles and Aretha Franklin (and eventually Taylor himself). So she decided to take his advice. And the result is this quietly stunning album. (I can't actually find this story now, so it might be a complete fabrication on my part)

She's not singing with the gusto of Franklin here. She's not passionately questioning her lover like the Shirelles. She's doing something a little more subtle. Her rendition of "Will You Love Me Tomorrow?" is a little more resigned and a little sadder, but I feel like it works all the better.

Tapestry has a little of everything on it and I've always been really happy whenever I put it on (even if I'm also sad or lonely). In a way, I guess King's voice is like the titular tapestry: delicate, intricate, elaborate, and perhaps a little threadbare. But make no mistake. Behind that tapestry is a solid stone wall. It's not going anywhere no matter what you throw at it. And I love that.

The next couple of albums are all, as it happens, older albums, so look forward to concerts from the years that the albums were released. It's so amazing to be able to find this kind of thing on YouTube. Also amazing: CK is roughly a year younger than I am right now in this video. Simply incredible. Criminy! James Taylor is only 23 in this!!!! Good grief!

You can buy Tapestry at Amazon, Amazon MP3, and iTunes