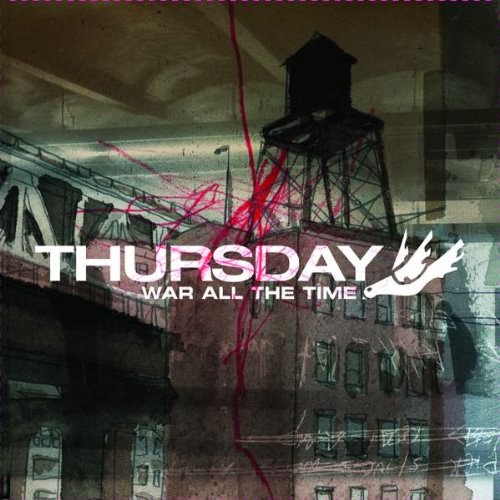 If this album was just its first track, "For the Workforce, Drowning" repeated over and over for 11 songs, it would probably still be on this list. I love that song so much. And it's a perfect opening shot for this album: sad, angry, inspiring, beautiful.

War All the Time one of a couple albums released right around 2003 that made me feel completely justified in the screamy/yelly, loud, pop-punky music I'd been listening to for most of college. The songs aren't about girls and love and heartbreak like much of the stuff I was into. They were about injustice and restlessness and death and beauty and loneliness. They made me feel like I was listening to something important. You could call them "Nowhere Man" albums, if that makes sense to you.

Thursday had hooked me with their breakout song from their debut (which was called Full Collapse), "Cross Out the Eyes" and the rest of that album had been just a wonderful buffet of yelling and chugging guitars. The detailed lyrics and reflection were there, no doubt, but it was definitely more of a "yell and trash your room" album. The follow-up, War All the Time, has elements of that, but it also has moments of quiet that are somehow FAR more devastating.

When my children ask me to play them something that I listened to in college, I will put this album on. It represents the best of what my musical exploration led me to in those days.

Thursday - For the Workforce, Drowning
Thursday - War All the Time

You can buy War All the Time at Amazon, Amazon MP3, and iTunes
Posted by James! at 12:00 PM