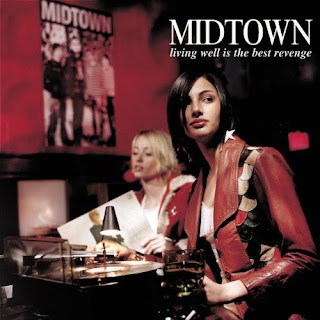 I found this album at the low-point of a post break-up sadness. I was in a music store in an outlet mall that, at the time, was two towns over, but which now is just down the road. I was with one of my best friends in the world and the title of the record leaped out at me like a beacon.

I had seen Midtown open for Blink-182 the previous summer. They introduced themselves as Guns 'n' Roses and played a fairly faithful cover of the beginning of "Sweet Child o' Mine"

But I didn't make the connection until later. All I knew in the outlet mall was that the album was on Drive-Thru Records (at the time, home of such perennial favorites as New Found Glory, Finch, The Starting Line, Rx Bandits, Something Corporate, The Early November, and Homegrown) and that I liked the title.


It's all the way down at #95, but if I told you that this album is, from start to finish, a textbook in early-2000's pop-punk, you'd have to believe me. For it is so. There are lots of tempo changes, anthemic choruses, and enough breaks for punk rock jumps to keep you airborne for what may be an unhealthy amount of time.

Here's a video that would occasionally play on MTVU probably my sophomore year:

And here's the song that kicks the whole thing off. Still one of my favorite pop-punk songs.

Midtown - Become What You Hate

You can buy Living Well is the Best Revenge at Amazon MP3 and iTunes
Posted by James! at 12:00 PM