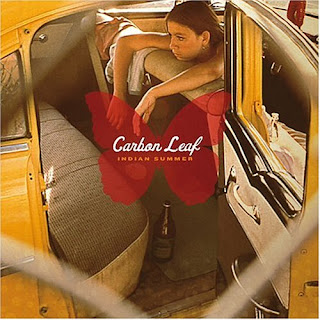 This is an album that I am surprised made it to the list. It's one of those albums that subtly insinuated itself into my life through friends.

Carbon Leaf are a Virginia band that I had been hearing about for a while because they were getting really big but hadn't been signed to any label yet (this was a bigger deal back at the turn of the millennium than it is now) and they had a song "The Boxer" that I occasionally heard on the radio. It was good.

Then they released this album and came to play at my college. I'm not sure which happened first, but we went to the show and it was great and then my roommate Riley fell in love with this album.

When Riley falls in love with an album, everything reminds him of it, he plays it all the time and it's really kind of lovely :) So I got to know the album a little bit over the next couple of years when we lived in an apartment together.

And then we graduated, I moved in with my wife (at the time she held the rank of "fiancee") and got a job in the lab at a local Perdue chicken further processing plant (no gross slaughter smells, lots of yummy herbs and spices smells) and a guy I worked with in that lab ALSO was in love with this album. And also displayed this love by playing it over and over and over.

And so I think of those two jolly individuals when I hear this album.

But more than just the nostalgic context, it's a tight album. Each song is catchy and distinct. There are lots of fantastic images and singable choruses.

Here's a video of them recently performing the lead-off track.


And here is the song that, if all the other songs on the album where just static, would possibly still have landed this album on the list.

You can pick up Indian Summer at Amazon, Amazon MP3, iTunes, and the band's web store
Posted by James! at 12:00 PM