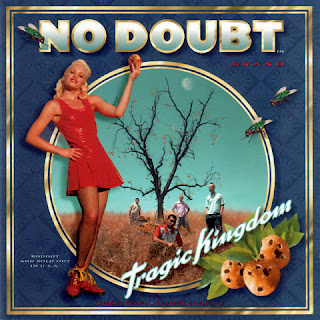 What else is there to say about this album? It's a classic, obviously. One of the many examples of "Musicians make better albums when they're angry" albums from the mid-90's that would lead to a number of disappointments with albums by those same bands in the late 90's/early 00's.

Tragic Kingdom was one of the first albums I went out an bought on my own. It had gotten overall good reviews in my mom's Focus on the Family newsletter so that was a point in it's favor (though a horrifying point looking back) and I had loved the video for Spiderwebs

Speak of the devil:

Another point in this album's favor is that someone played "Sunday Morning" during the dance that closed out Summer Camp probably in 1996. And there was a cute girl that was jumping all over the place to that song. So that helped. Here's that song and the song that leads into that song. Probably my favorite two songs on the album

And then there's the album itself. It's got just enough SoCal ska flavor to make it light and fun and just enough pop sensibility to make it commercially viable.

I saw someone on Reddit post a comment on someone else's post of "Sunday Morning" saying something to the effect of, "This is the best song on Tragic Kingdon. Oh, and please don't tell anyone I used to listen to Tragic Kingdom."

And I think it's sad to be ashamed to listen to such a fantastic album.

You can buy Tragic Kingdom pretty much anywhere. Like Amazon, Amazon MP3,  iTunes, or Best Buy.
Posted by James! at 12:00 PM