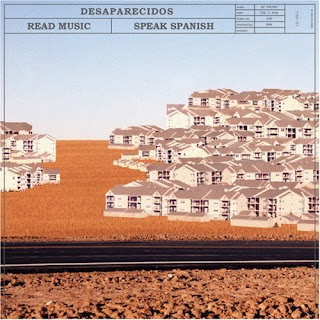 When you hear about "Conor Oberst's punk band", I'm not sure you come up with the right image (or, like, sound image....what's a sound image called?). I really like Bright Eyes, but if you told me that there was a punk band led by the main guy behind Bright Eyes, I would be skeptical.

First, I would say that they're not a "punk" band. The sound they have is better categorized as "angry, political rock". And that might be splitting hairs, but they are hairs that need to be split.

Listening to Deseparecidos puts me in that bitter, angry, cynical mood that all good political music should put you in.

And it's LOUD. So loud, in fact, that I couldn't find any videos that weren't completely drowned out by the volume of the guitars and drums. Which is a good thing in a way, but in a "I want videos for these posts" way, it sucks.

So here are two songs that flow from one into the other on the album. The album is only 9 songs long, so this is like 22% of the album, right here.

You can by Read Music/Speak Spanish at Amazon, Amazon MP3, iTunes, and the Saddle Creek store
Posted by James! at 12:00 PM