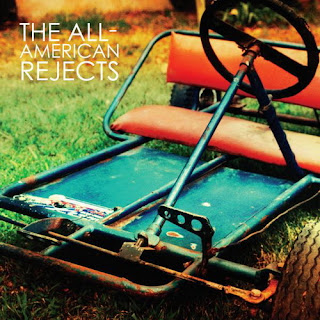 This is the album that was the achievement of everything that I, personally, hope for as a blogger.

My friend, suitemate, roommate, and Best Man Riley and I were going through free CD's that we'd gotten at MACRock (Mid Atlantic Conference) (It's a music weekend that happens in and near my college) (Or at least it WAS. I can't find a good website to link to, but there IS a twitter account for last year's event, so maybe they've just moved off of websites)

One of the CD's had two songs by a band called The All-American Rejects. So first of all, I loved the name right off the bat. But would the songs be good?

The first 15 seconds of "Swing Swing" proved to me that not only were the songs good, but I needed to get my hands on everything this band had to offer. Riley's reaction was the same. We found a couple of songs on....let's see, it would have been Limewire? Kazaa?

The album came out on 10/15/02, which was right around Riley's birthday, so I picked him up a copy and we listened to it and that was when the dream came true. This band that had a cool name and to good teaser songs, had made an album that DELIVERED on the promise of the teaser songs.

They would hit it big with "Swing Swing" and the album would be re-released on a major label in January, and the band would have more hits throughout the years, but I have always thought of this album, this band, as something we saw coming. Which is, of course, the dream of the ambitious blogger.

Here are the videos for two of the singles. Because they are representative of the kind of videos that all my favorite bands were making back then (see the Midtown entry for confirmation of this)


And here's the other song that was on that first sampler CD, along with "Swing Swing"

The All-American Rejects - Don't Leave Me

You can buy The All-American Rejects at Amazon, Amazon MP3, and iTunes
Posted by James! at 12:00 PM