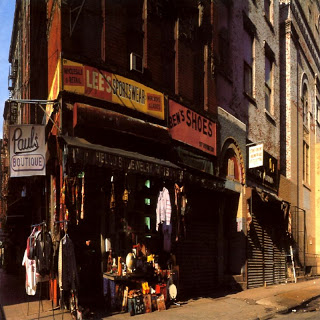 This, like the Bad Religion album from the previous post, wasn't an album that I have specific memories about. I heard that it had a lot of samples on it and that it was a great album and that you couldn't make it today because it would be too costly (although my Dad and I recently had a discussion about how Kanye should remake it beat for beat, sample for sample, paying all the costs, just because it would be an ostentatious thing to do...) so I bought it.

And it is exactly as it was purported to be. Probably my favorite of the three Beastie Boys albums I've heard all the way through (the others being Hello Nasty and Hot Sauce Committee Part Two) and, perhaps more importantly, a departure from the bin that people had put them in (frat rap rock).

Here's the video for the first true song on the album, "Shake Your Rump"

And here's a wonderful video that someone made that breaks down the samples from "Shake Your Rump". It says that it's Part 1, but I haven't been able to find any subsequent videos. But maybe the massive popularity of this blog post and series will inspire him to do more!!

And here's one more for the road.

You can purchase Paul's Boutique at Amazon, Amazon MP3, and iTunes
Posted by James! at 12:00 PM