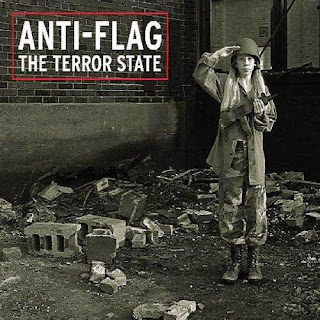 The first thing about this album is that I actually don't believe I ever saw that cover. The cover of mine was a text block about how the cover was censored by many retailers (apparently the retailers of Harrisonburg, Virginia were among them) and it gives a web address for viewing the actual cover (shown above) which depicts a young girl (lead singer Justin Sane's niece) dressed in fatigues.

So we're already starting off with some tension. And it isn't eased by the lyrics. And that's exactly what you want from this kind of album.

I had heard Anti-Flag's previous album A New Kind of Army and, while I liked the inflammatory, rallying lyrics, the production left something to be desired.

With The Terror State, all the pieces come together into a glorious, white-hot, sarcastic battle cry. And I'm hooked.

The songs are more diverse, too, and that really helps. You wouldn't expect a band like Anti-Flag to start their album with the sound of an acoustic guitar, for instance. But they do. In this, the first track. Guess who it's about ;-)


And it only gets louder and angrier. I know it might be sacrilege, but this is as close to a reincarnation of The Clash as we're going to get. This one album. I don't even have any Clash albums further up the list, so start heaving those stones.

This album also sports one of the many unrecorded-by-Woody-Guthrie songs that bands like Anti-Flag and Dropkick Murphys were recording around this time, Woody's estate, I believe (or at least imagine), seeking out artists that Woody would have supported and enjoyed. But I'm not going to feature that song on this post. You'll just have to get the album.

You can buy The Terror State on Amazon, Amazon MP3, and iTunes
Posted by James! at 12:00 PM