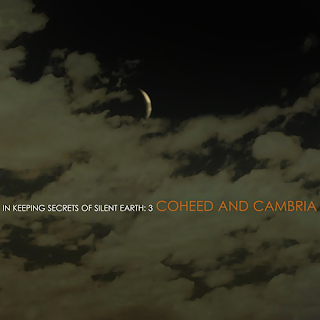 Coheed and Cambria In Keeping Secrets of Silent Earth: 3, 2003

Of all the albums that I'm going to write about in this series, this may be the weirdest. It's the second part of a four part sci-fi/fantasy epic (but it's actually the 3rd episode (hence the "3") kinda like the first Star Wars movie was actually Episode 4). Coheed and Cambria (which refers to characters that are both the center of the action and also killed in the previous album) is a prog-punk band from New Jersey featuring lead singer Claudio Sanchez (confusingly, Claudio is also the name of Coheed and Cambria's youngest son, the hero of the whole thing (and especially the hero/focus of this album)) whose vocals are one of the most polarizing things in post-2000 music.

For me, this album marks the soaring apex of what this band is capable of. The first album, Second-Stage Turbine Blade, is very very good, but feels slightly unpolished. The five albums that have followed In Keeping Secrets have been almost TOO polished, losing some of the wild abandon that made the band fun to listen to. But In Keeping Secrets is the best of both worlds. It had incredibly honed pop hooks, but also a feeling of "anything could happen".

As for the plot of this particular episode of the epic, you get a general idea after repeated listens, but fortunately, Claudio worked with author Peter David and illustrators Chris Burnham and Aaron Kuder on a comic book series that sheds a little more light on the subject:

Ten years after the "Second-Stage Turbine Blade", son Claudio Kilgannon emerges from the depths of Shylos Ten, the Fence's "quiet" planet where the Red Army performs its brutal interrogations and imprisonments. In finding out that his entire family has been murdered, Claudio begins his quest for vendetta. His foes, Supreme Tri Mage Wilhelm Ryan and General Mayo Deftinwolf sense that he is still alive and holds special powers. They know they must stop him before he defeats them. Meanwhile, Inferno (Jesse Kilgannon) takes up arms against the Red Army ("Man your Battlestations") in an effort to seek the same kind of vengeance on him. In Claudio’s re-emergence he teams up with Ambellina, the Prise who is cast out by her peers and forced to be his guide. The pair along with Sizer, a disassembled IRO-bot, seek out Inferno to find answers as to why his family were killed, but their plans take an unexpected turn in a ship called the Camper Velourium, and a freighter pilot named Al the Killer. (from here)

So, I mean, that's what we're working with in terms of plot, but don't let that throw you. This is a fantastic album from start to finish.

Here's the video for one of the catchiest songs on the whole album. Confusingly, the video doesn't have  anything to do with the aforementioned plot but it's still the one I prefer when compared to the video for my favorite song from the album (see below) which is a weird, comedic look at the band trying to pick up girls at a bar.

You can buy In Keeping Secrets of Silent Earth: 3 at Amazon, Amazon MP3, and iTunes
Posted by James! at 12:00 PM