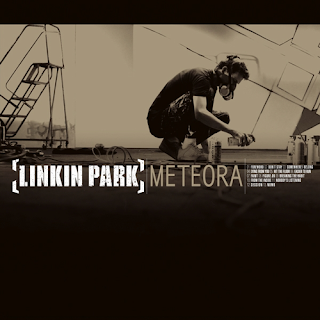 Yet another album from my SYoC. Actually, to be completely fair, it's from the summer after the SYoc (SAtSYoC) but it's from the same year, so get off my back!

This album was just chock full of hit songs for the band and was somehow even bigger than their first album, Hybrid Theory. 4 of the 5 singles from it went to #1 on our Alternative Songs chart compared to only 1 from HT. 3 of the 5 made the Top 40 of the Hot 100 compared to only 1 from HT. Now, it's absolutely a fact that Meteora  wouldn't have done as well if it wasn't for the foundation that Hybrid Theory laid, but I truly believe that Meteora shows huge growth from the band.

It showed that they could make an album that moved away from the rap-rock label that they had been associated with, while at the same time representing both rap and rock fairly faithfully.

Here are two songs from the middle of the album that weren't released as singles.

And here's the FANTASTIC song that closes the album.