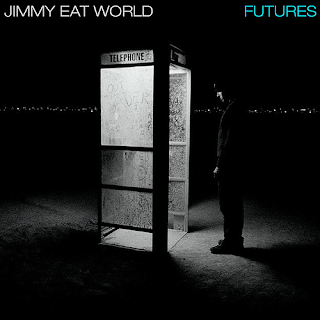 The first album that my friend Riley told me that I should check out and that I would love was Jimmy Eat World's smash breakthrough hit Bleed American. I am almost positive that he was telling me about it before "The Middle" blew up on radio stations, but it was close. And it was definitely pre-9/11 because they rereleased the album as Jimmy Eat World because the first title was too provocative in that hypersensitive world.

But it took me a long time to get into Bleed American. Something didn't quite click for me. It was ALMOST pop-punk. It was ALMOST alternative. But something was off. Of course, I eventually got into it, but it was probably 6 months after Riley first told me that I should check it out (Which is a recurring event in our friendship).

Futures was similar. If I recall correctly, Riley got a copy of it before it was released and was just over the moon about it. Singing along in his room, cranking it in his car. All of the signs of "Riley's in love with an album" that I had grown accustomed to over the years.

But I don't think I truly loved the album until I put it on one day in late 2005 or early 2006. I was working in the lab at a Perdue chicken factory, testing chicken for bacteria and stuff. It was a Saturday and on Saturdays, one person would come in, do a couple of things and then leave, so I was all alone in the lab and I put this on and it clicked. Every song made sense. The loud ones rocked, the quiet ones simmered. It was eye opening. And I can't explain it, but on that day, this became my favorite Jimmy Eat World album.

The things that bugged/bug me about their other albums weren't here. Things like meandering hooks and awkward lyrics. Nothing huge, by the way. They have a solid back catalog. It's just that this album is PERFECT. The hooks hit right when they should, the lyrics are introspective and thoughtful and it's like that on every track. I love listening to this album.

I never saw this video when it was out, but I love the song, so here's the video for "Pain":


And here are two of my all-time favorites by the band, both from this album

You can buy Futures on Amazon, Amazon MP3, and iTunes
Posted by James! at 12:00 PM