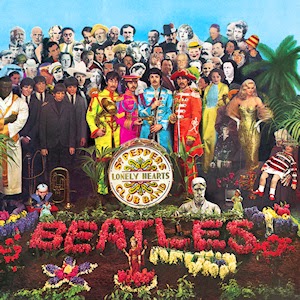 So, what the hell am I supposed to say about this album that hasn't been said before? It's not a niche album that's near and dear to my heart like Dessa. It's not a genre classic that maybe isn't familiar to some people like Thursday or the Get Up Kids. It's The Beatles.

I remember checking this and Rubber Soul out of the library in Brookline one summer and realizing that the band that I had grown up hearing play songs about love and submarines also made this weird psychedelic stuff that wasn't as straightforward as who loves whom (yeah, yeah yeah) or how much loving they're giving or how many days a week they're loving that person or what kind of day's night it'd been.

It was nearly impossible to pick just one Beatles album for this project, so I went back to the first principles of this whole thing: the Desert Island. What Beatles album do I love but also haven't listened to to death? Weirdly, I feel like I listen to Revolver more than anything else and then maybe Abbey Road? After some amount of deliberation, I decided this one was eclectic and great enough that I could listen to it sitting on the beach watching hope of rescue dwindle for weeks.

Of course, I'd probably make some sort of Beatles mix CD to take with me. I mean, that's what everyone would do, right? Because surely there's no one that can say that all of the Beatles songs they could ever want to listen to exist solely on one album. I just can't imagine that being the case. I mean, for one thing there's the second side of Magical Mystery Tour which is all Sgt. Peppers outtakes (Ok, I just looked it up and only "Penny Lane" and "Strawberry Fields Forever" were Sgt. Peppers outtakes. But my point remains the same.)

I mean come on. This album is one of the greats. I know it's been hyped to death and there are probably people that are like "Ugh, that album is SO over-rated" or whatever. And I readily accept that there are people who don't like the Beatles or don't know who they are and have no interest in finding out. But I maintain that this album has something for everyone.

I couldn't find an acceptable video of a performance of a song from this album. So here's three songs from the album. And if you've never heard this album before and these songs are an introduction for you, please leave a comment. I'm very very interested in learning more about your world view.

You can buy Sgt. Peppers Lonely Hearts Club Band (I'm assuming to upgrade from vinyl or something) at Amazon and iTunes
Posted by James! at 12:00 PM