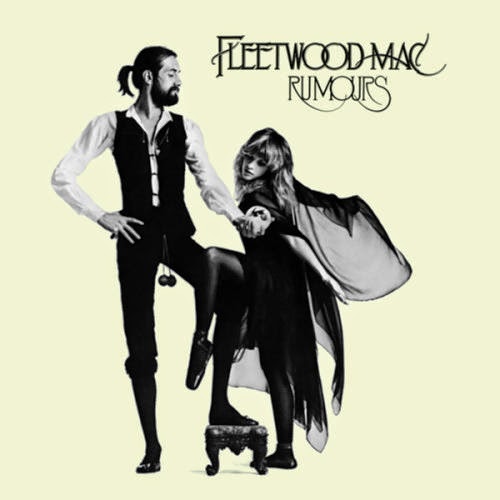 I came to this album later in life than I feel is fair. This is SUCH a high school album and I feel like I would have listened to it every day in my car if I'd discovered it in 1998 instead of many years later. I don't even know when I finally decided to give this one a listen. 2007? Later? I know that when I first started listening to it, I told my Dad how much I loved it and he told me a story about listening to it over and over when he was roughly the same age as I was.

It's an album that, for me at least, is better the more you imagined everyone playing on it hated each other. I like to imagine scowls and glares in the studio and then this AMAZING album coming out of the whole ordeal.

I was talking to a friend on the phone today about that part in Wayne's World where Wayne says that everyone knows Frampton Comes Alive because you received a copy when you moved to the neighborhood along with samples of detergent. I've always found that this line rings false for me. But I was realizing on the phone with my friend that it rings true if the album is Rumours. I feel like everyone knows this album. Whether everyone LIKES this album, I don't know. But I can't figure out what's not to like. Sure, "Don't Stop" and "The Chain" are a little dated or something, but seriously? You don't like "Songbird"? "Go Your Own Way" doesn't do anything for you? "Gold Dust Woman" leaves you cold? I don't think so. If you "don't like" Rumours, then my bet would be that you haven't listened to it or you haven't listened to it recently.

So, I wanted to do a blog post a number of years ago that would have featured two pieces of writing about the first several seconds of two songs. But, for whatever reason, I never wrote that post. But here is one of the pieces of writing. It's from Chuck Klosterman's Killing Yourself to Live. It's amazing. Everything I've ever read by him is amazing.

"I once interviewed Jeff Tweedy of Wilco, arguably the least pretentious semi-genius of the modern rock age. We started talking about how the best parts of songs are usually accidents; Tweedy mentioned that the most transcendent moments in pop music are inevitably unintentional, because listeners reinvent those mistakes and give them a personal meaning no artist could ever create on purpose. This segued into a conversation about Fleetwood Mac, and I told him about the way Quincy and I would incessantly play the opening five seconds of "I Don't Want to Know"[sic] at maximum volume. This is because--if you play the song loudly enough--you can hear Lindsey Buckingham's fingers sliding down the strings of his acoustic guitar. His sliding phalanges make this unspeakably cool squeak; it sounds organic and raw and impossible to fake. Q and I would play this opening sequence over and over and over again, and we were convinced that this was the definitive illustration of what we both loved about music; we loved hearing the inside of a song. And when I told that story to Tweedy, I was surprised how inexplicably happy it made him.
'It's so great to hear you say that,' Tweedy said. 'I don't know Lindsey Buckingham personally, but--from what I know about him--I would assume he's the kind of artist who wants to control every single element of how his music is perceived. Yet the one moment off Rumours that was most important to you and your friend is a little crack he couldn't spackle over. Nobody can control anything, really.'" (Buy the book!)

Oh, and here's the song for reference:
Fleetwood Mac - I Don't Wanna Know

I'm probably about your dad's age. Lol. One of my favorite albums ever. And Frampton Comes Alive was EVERYWHERE in 1976. It gets the shoddy treatment because girls loved him and he followed with a crap album, but the guy has guitar chops and has done great things.
Listening to FCA and Rumours still takes me back to a specific time and place, and I will always hold them dear.

Thanks for the comment, Nat! PFramp has always been a curiosity to me because I feel like it's pretty rare for someone to be MOSTLY known for a live album. Did he do some good studio albums leading up to FCA?