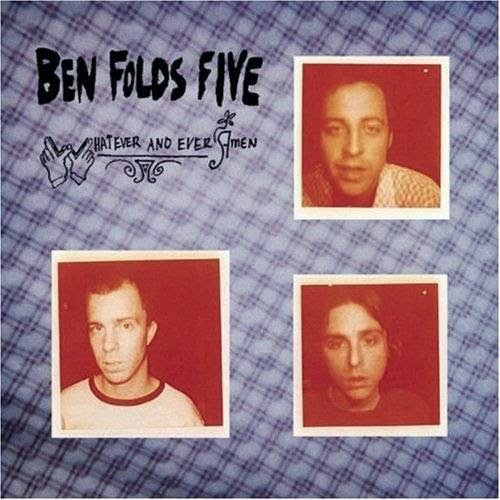 Ben Folds Five Whatever and Ever Amen, 1997

Ben Folds has always been the master of mixing the sarcastic with the sincere. This was the first album I ever heard by his band Ben Folds Five and it taught me that you can be cynical, romantic, nerdy, AND rock the fuck out all in the same album space. Sometimes all in the same song.

The way I came to hear this album was that two girls were talking about the band in 9th grade World History class (shoutout to Ms. Rudasill. Super important teacher in my education as well as my development as a person) and I butted into their conversation (my, how little has changed since then) and told them that I had heard a couple of singles (probably "Brick" from this one and "Army" from the next one) was very interested in learning more about them. So my friend Amber said that she had both albums (I don't think any of us realized this was actually the band's sophomore release, but it's not like we could go on Wikipedia and track down the exact chronological discography of the band, so get off our backs, damn.) and was I interested in a more electric experience or a more acoustic experience? Actually, I feel like she HAD to have said "electronic" because I selected "acoustic" over what I now realize was music I imagined sounded much like Depeche Mode (though I couldn't have told you that then) and I won't swear that she used the word "experience", but you get the idea.

So I picked "acoustic" and the next day, she brought this album in for me. I took it home, put it into the big old stereo in the living room and, since the house was otherwise empty, cranked it and jumped around to the opening track: "One Angry Dwarf and 200 Solemn Faces".

Over the years, I grew into my fandom of the band and began to appreciate all the intricacies of this album. The rage of "Song For the Dumped", the humor of "Battle of Who Could Care Less", and the heartbreaking 1,2 punch combo of the closing tracks, "Missing the War" and "Evaporated".

I think my favorite thing about this album is that it has something for everyone. I would feel as comfortable listening to much of this album with my grandma as I would putting it on during a road trip with a college buddy. That's a rare thing these days.

You can buy Whatever and Ever Amen at Amazon, Amazon MP3, and iTunes
Posted by James! at 12:00 PM