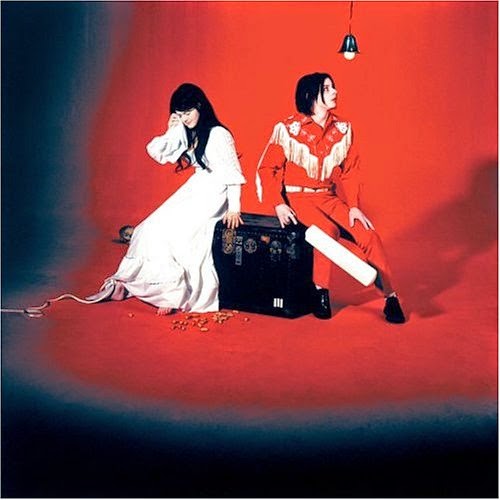 I featured this album for a month a couple of months ago on my podcast, so I feel sort of like I'm ALWAYS talking about this album. Fortunately, it's a fantastic album that I don't mind talking about.

In the months leading up to my purchase of this album, "Seven Nation Army" was all over the radio and MTVU (which was the station that one of the dining halls always had on. I kind of think I count this as "the radio" in my mind sometimes). So one day I went into Circuit City and, on the recommendation of a number of friends, listened to the samples of a couple of songs from the album. (Background: CC (along with many other stores) had these devices in their CD sections where you could scan the CD and read info about the band and the album and listen to samples of the tracks on the album.)

The reason I purchased the album was because of the sample I heard of the song "Black Math". They picked the part of the song where the guitars go from sluggish and trippy back into the fast and driving speed that the song is at most of the time. I love tempo changes in songs and so that, plus knowing how amazing "Seven Nation Army" is, led to me purchasing the album.

It's been more than a decade since I bought the album and it has transformed into almost a Classic Rock album for me. There are songs that hearken back to the 60's and 70's ("There's No Home For You Here""It's True That We Love One Another"), and then there are those weird, out of time White Stripes songs ("Ball and Biscuit" "The Hardest Button to Button" "Little Acorns"). And it's the combination of these two sounds that made them the amazing band they were. It's a hell of an album. It's all over the place and once you learn the twists and turns.

You can buy Elephant at Amazon, Amazon MP3, and iTunes
Posted by James! at 12:00 PM