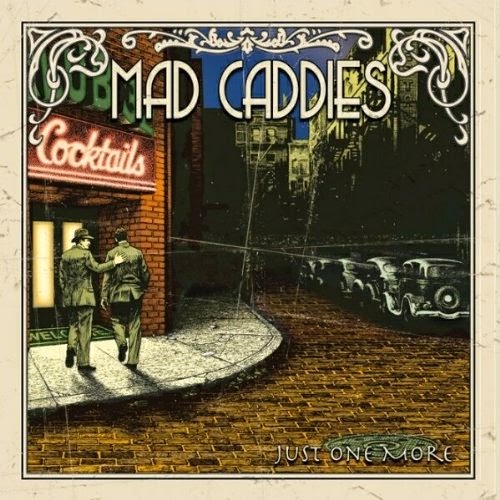 This album should be a fair-to-middling skacore (which I define as ska + punk. If I'm wrong please let me know) album. Mad Caddies were among Fat Wreck Chord's B-string bands and I had really enjoyed their previous album, Rock the Plank, because of it's fun, fast songs and slight pirate theme.

Then they put a song called "Shut the Door" on one of the Fat Music comps and I fell head over heels for this band. I'm not sure if "Shut the Door" was a Rock the Plank outtake, but that seems like it makes sense.

THEN they put a song called "Leavin'" on a subsequent Fat Music comp and I knew this band was special. They somehow find a way to seem reckless AND completely in control.

So I wasn't surprised that Just One More was a good album. 10 years later I am surprised that it made the Top 25 of this list because it turns out it is a GREAT album.

It begins with the easygoing "Drinking for 11" and then goes into a couple of harder-rocking numbers and it seems like it's business as usual, which is why when songs like "Spare Change?" and, holy hell, "Good Intentions" come along, the listener is thrown for a loop. They feel like songs that are destined to be classics. I'm not hyperbolizing when I say that "Good Intentions" is one of my all-time favorite songs.

So make sure you check out all of the featured songs because there's a wide range on this one. And if you like even 2 of the songs, then I'd say you would be remiss if you didn't pick it up. This is a sleeper classic if ever there was one, so get in on the ground floor before everyone else catches on!

You can buy Just One More at Amazon, Amazon MP3, and iTunes
Posted by James! at 12:00 PM