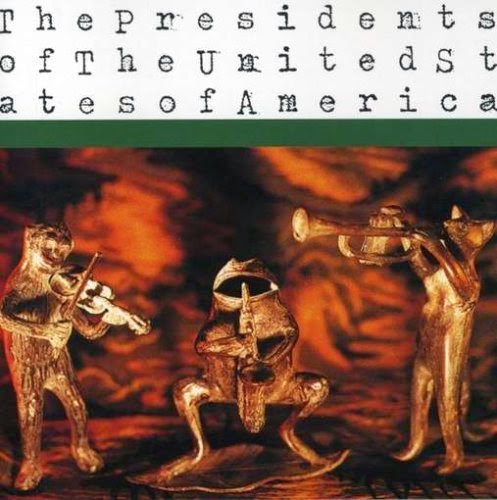 If you'll recall from my post on In Utero, I bought this album on tape in the same shopping trip as I bought that album on tape. But, while I realized that I was not ready for that album, THIS album was exactly what I was looking for.

I remember listening to it with my Dad and being slightly embarrassed that the first song, "Kitty", had such blatant and gratuitous profanity in it, but it wasn't an issue and the rest of the album, if I'm remembering correctly, is completely devoid of any obscene language at all. Which I'm just realizing is an interesting choice to make. Usually albums aren't so lopsided like that.

This album, and it bleeds into the other album I own by them so maybe it should read "this band", is what you'd get if you took a jazz band, gave them the synopses of 5 or 6 children's books, and then told them to make a garage rock album. This album sounds like what that would sound like if it worked. It's an album full of bugs and spiders and frogs just sort of wandering through life. Maybe the genre is "Slacker Animalcore".

Amid all of this are glimpses into the similarly slackerish lives of humans. Having an intense and admittedly awkward encounter with a stripper as an adolescent in "Stranger" or highlighting our base drives towards exhibitionism and notoriety in "Naked and Famous". In fact, the "anthem" of the album is a fantastic song called "We Are Not Going to Make It" which is especially fun for me because it was played by Misc. Debris, a band that a lot of my friends were in solely for a talent show, that did not, in fact, make it. They were disqualified for getting watermelon juice on one of the curtains. Or for smashing watermelons when they said they wouldn't. Or something. It was awesome. [EDIT: I have now been shown a video of the Misc. Debris performance and the song was not played at that time. I will continue to update on this miniscule part of the post as events are clarified by other people on Facebook.]

The Presidents of the United States of America are such a fun band and this album is not only fun, but also REALLY good. If you have only heard "Lump" and "Peaches", then you have a good idea of how fun it might be, but this album will blow those expectations out of the water.

You can buy The Presidents of the United States of America at Amazon, Amazon MP3 (lots of bonus tracks!), and iTunes (same bonus tracks as on Amazon MP3!)
Posted by James! at 12:00 PM

Labels: 1Y100A, Presidents of the United States of America