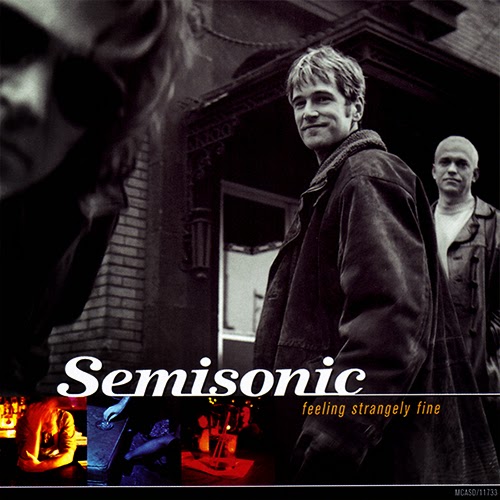 Feeling Strangely Fine SHOULD have been one of these albums. It starts with "Closing Time", the song that most people who remember 1998 can remember being all over the radio, and if they know the name Semisonic, is the first and foremost song they associate with the band.

But then something weird happens.

The rest of the album blows "Closing Time" out of the water. Not to say that it's not a good song. It's just that it's the starting point for one of the best power-pop albums of its time. The album is full of introspection, love-sickness, tentative hope, and meditative happiness.

It's one of those albums that you have to wave away the protests of the people who don't know how amazing it is. "I know. I know. That song is SO 90's, but listen to the REST of it!"

It's one of those albums that you can put on and catch the eye of the other person in the room who knows what an amazing journey everyone's about to take.

In recent years, I've forgotten what a gem this one is and I'm really happy that I'm doing this series so that I can unearth some of these forgotten treasures in my collection.

{Tangent: In a similar vein, Phantom Planet's The Guest is this album's kindred spirit, arriving on the wings of another hit single that starts the album. If you like one of these albums, I would be surprised if you didn't like the other.}

You can buy Feeling Strangely Fine at Amazon, Amazon MP3, and iTunes
Posted by James! at 12:00 PM

Martin, thank you for linking me to your excellent post! And for giving me a new blog to follow :)