Dessa: The Appetite For Distraction Interview 2 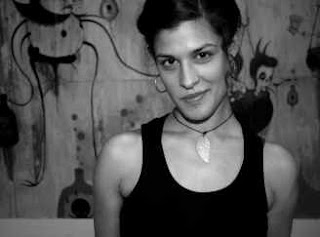 So, last year I was sitting around thinking and it struck me that it might be fun to send Dessa a bunch of questions. I did and she was kind enough to answer me faster than I could have imagined. This is the post I wrote last year based on her responses.
I've seen Dessa in concert twice more since then. One time on her solo tour and one time with Doomtree touring for No Kings. I have also been a part of the #Lithop book club on Twitter, where we have read Infidel by Ayaan Hirsi Ali and Teaching a Stone to Talk by Annie Dillard. So when the same idea occurred to me this year, I felt a little better prepared for what I wanted to ask her. And I'm so pleased with the results.
1. When I bugged you last year about what you were reading, you said you were working on Peoples History the United States. Are you still working on it?

People's History of the United States... beat me. Still haven't finished it, so embarrassing. Although this question is probably the cue that will prompt me to dust it off.
(Maybe I'll bring this up in every interview while at the same time trying to finish it myself. You know, to create an atmosphere of needless competition)
1a. I find it almost overwhelmingly difficult to be reading more than one thing at a time. But I know some people that are actively reading something like 5 books at any given time. Where do you stand on this very important issue?
I usually do one, sometimes two titles at a time. A lot of my reading, however, is rather modular fare--short stories or brief essays. So the alternations between two texts isn't quite as taxing as it might sound.

2. So, when I saw Doomtree in DC in February, POS (is it more acceptable to refer to him as Stef or POS?) said his new album would be coming out in the summer. Does this mean we won't see your album until the fall?
I'm still working on my album, so I'm trying to resist the impulse to plan for its release, although during moments of writer's block, planning a release party can seem like a walk in the park.

3. Something that fascinates me about concerts is the idea of building a setlist. How do you, as a solo artist pick a setlist? How does that differ from how the whole Doomtree crew picks one? Do they vary over the course of tour or is there basically one set setlist for the entire thing? (Haha that's like three questions in one bullet point...it's like a college exam. I will only be accepting answers in the approved Blue Book format.)
Doomtree's set list take a lot of things into consideration: BPM, mood, and featured performers. We try to pick a song sequence that won't have any one artist sitting on the bench for too long, or ask him or her to rap for too many songs without a breather.
When drafting my own sets, I consider mood first and foremost--I don't like to juxtapose songs with wildly different tones, doleful to cocky, for example. Then I'll consider the key and instrumentation--don't want to put songs in the same key back-to-back because I think it flattens the dynamic.

4. What songs/bands/albums have you been loving lately?

I've been listening to two songs by Jo-Jo on repeat. No one has been able to determine why I would do this.
4a. Which two Jo Jo songs? (this is hard-hitting journalism, clearly :))
Leave and Too Little Too Late
(I nearly bought both of these songs on iTunes, but I think the music videos will suffice. The thing is, I get why Dessa would dig these. JoJo is a very talented girl, the songs are poppy, sassy, and hip-hoppy. There are great hooks and they stick in your head. I get it.)
5. I have this theory about Doomtree and No Kings. The most exciting, dynamic parts of the album for me are when it goes Dessa into Mictlan. It happens on Bolt Cutter, it happens on Fresh New Trash, and I'm positive it happens elsewhere, too. I feel like it's so exciting because you two are like polar opposites. Is there any truth to that?
I think Mike and I definitely hold down the ends of the Doomtree spectrum. We are both, however, hopelessly hammy and campaign every year for some sort of costuming at the Blowout

6. How are you feeling about SXSW this year? It has to feel pretty good to go out there after such a successful album launch and tour.

SXSW is always a chaotic, bingy test of endurance. Some amazing music, some amazing lines, some amazing hairstyles, and some amazing hangovers. It's sort of like the State Fair, with skinny jeans.
6a. In an email that she sent to me right after SXSW was over, Dessa had this to say about how it went.
SXSW kicked my ass. (It has always seemed to me that SXSW would kick anyone's ass, with performances sometimes STARTING at 2am or later)
7. How awesome is it about Lazerbeak's newest project (Baby Beak)? Is it finally time for DTR to unveil its new line of baby products? Onesies, "wings and teeth"ing rings, False Hopes lullabies EP, etc.
Lazerbeak and I sit next to each other in the backseat of the mini-van and most Thursdays (ultrasound day) I get an update of how big she is (often in terms of the fruit to which she can most readily be compared). Beak is one of my close friends and I'm so stupidly excited for him and Cam (his wifepiece). I'm excited to do a bit of vicarious living and find out how the arrival of his daughter will change his life. Seems like he's about to get snow-globed.
8. Finally, my sister is visiting this week and since she's also a huge fan, I thought maybe it would be cool if she got to ask a question, too. So, here is the question from my (almost) 18 year old sister: if you could have dinner with any three people who are currently dead, who would they be and why?
I'm really not sure I'd want to meet any of my heros, because conversation would be forced and maybe they'd be jerks. I just don't think Marie Curie wants to talk to a lay person about radiation--she's probably all talked out on that topic.
BUT, for the sake of speculation, if we can be assured that conversation would not be forced and they would not be jerks, I think I'd like to have sushi (because its my favorite) with Winston Churchill, Ryan Gosling, and da Vinci.  Just the three that came to mind.
9. Ok she has now bullied me into giving her a second question and since it's one I wouldnt think to ask, I gave in: what is your favorite article of clothing?
A good pair of jeans is tough to beat. And they don't come easy

10. I thought I'd round this off at an even 10 questions and ask you what your favorite song from the year you were born might be.
Oh man, to be honest, I'd have to see a list of songs from '81. I'm lousy at music trivia--never seem to remember what came out first, which label bought which, or who was on the charts when. But I remember that "King of Wishful Thinking" was an early favorite--maybe the first that I plunked out on the Casio at home.
[Ok, so "The King of Wishful Thinking" was released in 1991 and it was on the soundtrack to Pretty Woman. But I love it. So. What I'm going to do is threefold.
1. The video for the original song:
2. A New Found Glory cover that I love.
New Found Glory - King of Wishful Thinking from From the Screen To Your Stereo II
3. A song that I love from 1981 featuring a very Dessa-like female lead singer
Blondie - The Tide is High (I got it from Blondie's Greatest Hits)]
Thanks so much to Dessa for being a constant inspiration. And thank you for reading. Go to Doomtree's Website or the Doomtree Bandcamp page or Dessa's Bandcamp Page and just buy a whole bunch of stuff. They're also on iTunes, so I mean, if you have a Gift Card....you know....use it.