Dessa: The Appetite For Distraction Interview 3 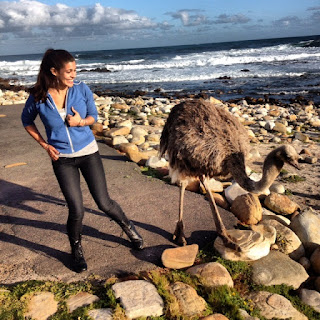 This is the third year I've sent the lovely and inspiring Dessa a list of questions and she has been so gracious as to answer them. As usual, I was blown away by the depth and thoughtfulness of her answers.

1. You mentioned in the interview you did with WCPN that the working title for the album (not the ACTUAL title, but the title that's on all the files) was Candy Falcon. What is a candy falcon? Is it a bird made of candy? Or is it someone who sees candy from far away and swoops in to nab some?

A year ago, I was working with the guys in the band: Sean, Dustin, and Joey. We'd come up with some ideas for the record and Dustin was ready to save them on his computer. He asked "Do you have a name for this one yet?" I didn't. So we figured that a working title was in order. I think I suggested "Falcon," but that sounded too simple. So we spent a few minutes making up a fake name that felt more sophisticated. Given my pretty incredible sweet tooth, "Candy Falcon" seemed like a great fake title.

2. A recurring image in Doomtree lyrics that I've noticed is that of the burning candle. It appears in "If and When", "Little Mercy", and in the title "A Candle in Chicago" among others. Have any of you intentionally picked up on this image? And do you think there's any symbolic reason behind its repeated use?

I actually had to look up "A Candle in Chicago," turns out that's an interlude on a Doomtree release from 2007. Who knew? Very often, songs go by their working titles internally, so none of us remember what the things are actually called. There are a lot of themes and images that Doomtree seems to orbit--sometimes we all find
ourselves independently fascinated by the same thing. Sometimes, I'm sure we inadvertently infect each other with ideas.


3. Have you made any progress on A People's History of the United States since last year? If you're keeping score, I still don't have a copy, so you're already outpacing me!

NONE.
4. Did your trip to Africa influence the writing of your new album in any way? New instruments? New images? New ideas?

My trip to Africa influenced my prose--after I came home I wrote an essay for the Star Tribune about how a safari challenged my ideas about the thoughts of animals--but it's probably too soon to know if any of what I saw will end up in a lyric.
5. Are you and P.O.S planning to co-headline a tour this spring/summer or are the sounds you'd be delivering too different to make a cohesive show?

This summer, I'll be touring my new record, which is usually a headlining endeavor. Meanwhile, P.O.S is still being mindful of his health--he's got a pair of lousy kidneys and is waiting for a transplant. I think it'll be a while before we're on a routing together, but I expect there'll be a few big crew shows that we'll play together this year.
6. When you're writing/recording an album, do you avoid listening to other music? Or perhaps do you listen to music that is the polar opposite of what you're writing/recording? I guess this question boils down to: Does listening to other music affect/distract your process?

I'm adamant about fending off obvious influences. When I'm working on something new, I try to avoid listening to artists who I might be tempted take cues from. Having just finished a record, I've been listening to music that's very different from my own: polyphonic Corsican music and some Parisian folk. (Until I wrote that sentence, I thought I was listening to those artists because they were working with different instrumentation and very different melodies--but it occurs to me that I can't understand the words in these songs, which make them pretty safe listening for someone who's anxiously fending off influence as a songwriter.)

6a. Obviously, I'm going to ask you for some examples of the polyphonic Corsican music and Parisian folk you've been listening to.

Here's a link to Pauline Croze's self-titled debut album (from which both of the above songs are taken) to download on Amazon.

Here's a link to her second album to download on Amazon.

6b. And the Corsican music?

The Corsican stuff I'm going to play close to my chest--I still harbor a distant fantasy of working with them some day and I'm keeping that card in my sleeve.

7.  Do have favorite tracks from "We Don't Even Live Here" and/or "Snaxxx"?

Mike and Stef made a really incredible song when they wrote "Get Down." Every night we play it on tour, it's a demonstration of the degree to which human behavior is affected by music. It's like a tide--organic, irresistible.

My predilection for more melancholy sentiments makes "How We Land" an easy favorite--contagious, propulsive, aching.

8. Do you have a favorite publication/source for interesting/thought provoking articles?

Still looking. I make a lot of resolutions about reading, and I end up falling off the wagon as soon as the thing starts rolling. I'd like to be a little more consistent, but in practice, I'm a binger--binge study, binge writing, binge Nutella (fork of it in hand at the moment). That said, my brother just put me on to damninteresting.com. Can't vouch for it yet, but looking forward to my next doomed resolution.
9. What's the most difficult part of being on the road for months at a time? I would imagine it would be a close race between a) waking up in places other than your home (a concept presented to me by Jackson Browne in "The Load Out") and b) trying to find acceptable food in a new city each night.

First, it must be said, that I love hotels. Every time you slide the electronic key card and push the door open, it's like a scratching a lottery card. Will there be a full bed or a king? Will there be a minifridge? Does that couch pull out? Could that be a piece of choc-o-late on the coverlet?

For me the hardest part of touring is sleep deprivation. I know a lot of musicians who can function quite nicely on 5 or 6 hours a night. I am not a member of that set. Deep fatigue makes all the little stresses of tour tough to handle gracefully--the rush, the bodily pains, the detours, the late arrivals, rushed load-ins, lousy food, whatever. And after more than a couple of weeks of exhaustion, I get emotional. It doesn't take much to make me sad or angry--which is not a good starting position for a person who lives within 3 feet of her colleagues for 17 hours a day. All said, however, I've got a hell of team. If you're going to be encased in an speeding van for a great deal of your life, you've got to pick some great travel companions. And I ride with some incredible players, and some incredible people.

That'll do it for the Q&A. I'll tweet you the link when I've published it. Hope to see you in DC soon. Take care. Get some sleep! :)

Please do! I'm hoping to head your way soonish. Hard to sweep the same region too frequently, but I give us a 36% of heading through in May.

I will take those odds. You can find her published tour dates, as well as the tour activity of all of the other members of the Doomtree crew, HERE. Details of her SXSW appearances haven't been listed yet, but keep an eye on that page and you'll have that info soon enough. If Dessa is performing near you, you owe it to yourself to see her. Trust me.

As always visit Doomtree's Website for info, merch, and more!
Posted by James! at 11:19 AM