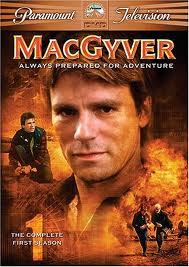 So, I'm going to do the season finale next week instead of this week. It's a purely procrastinational change, but I thought I could do something semi-fun/quick this week.

So, here are the five MacGyver Monday episodes that, if Google Stats are any indication,  you may not have seen. I'm going to give them a quick little synopsis and then link you to them so that you can check them out if you haven't already, or check them out again if you have!

To up the already miniscule odds slightly, I will be doing the synopses from memory!


Hellfire - Things begin to heat up when MacGyver visits some old friends and helps them battle the forces of nature and thermodynamics so that they might be able to live out their dream of being rich off of black gold, Texas tea.

Every Time She Smiles - MacGyver is on his way home with some very important microfilm when he meets the lovely Penny Parker (Teri Hatcher) and things take a series of unexpected twists and hilarious (and dangerous!) turns.

Slow Death - It's a case of whodunit on a train that has been stopped by bandits on the wild plains of India! Can MacGyver keep the peace AND discover the culprits so that the bandits allow him to get his information across the border?!

The Enemy Within - A former Soviet agent has defected and Pete is using her to identify the traitor in their midst. MacGyver, with the help of a fellow agent and friend, must protect her while they attempt to unmask this deadly mole!

Nightmares - MacGyver must race against the clock and use all the help he can get from a new friend before the poison in his bloodstream kills him! Will he tell his captors where he stashed the microfilm or die trying to get the antidote??
Posted by James! at 8:00 PM