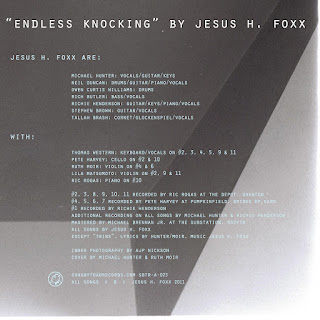 I always imagined that when I finally got to college, they are exactly the kind of thing I would be listening to. They have a little bit smoother sound than Meursault, though if you told me you heard similarities between the two, I wouldn't disagree with you.

There's a comparison that I came up with while listening to the album (It's called Endless Knocking, by the way. I am literally the worst. Who waits until the THIRD paragraph to mention the name of the album?? I suppose this is also a post to talk about the band in general. Ok, I feel better.) at the grocery story and I feel like it's apt. Here's where I make the disclaimer that I recognize that making this kind of comparison is a bit lazy, but this comparison really helps me wrap my head around the band and so I'm going to say it. In a separate paragraph. Ready?

Jesus H. Foxx (on this album, at least) sound like what the Talking Heads would have sounded like if Matt Berninger (lead singer of The National) were the singer.

And I think that's not only a good comparison, but it's a very good thing to sound like. I am looking forward to exploring this album more as the weeks and months go by.

Here's a taste of the album. I feel like it gives a good idea of the range that these guys are capable of. There are other songs that make the Talking Heads/National thing make more sense, but I think you'll be able to get the gist of what I mean.

Jesus H. Foxx - I'm Half the Man You Were from Endless Knocking