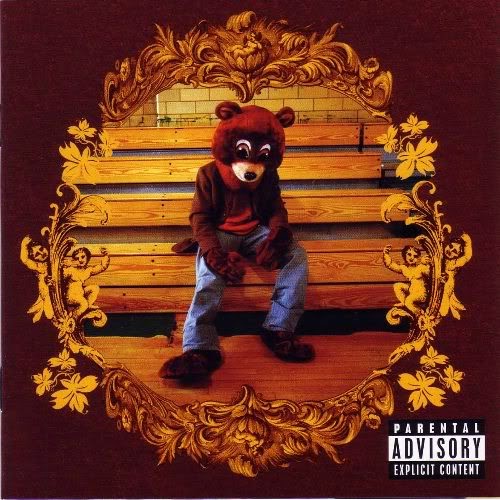 First of all, I certainly didn't plan to have this post come out two days after the 10th anniversary of the release of this album. It's a pure coincidence. But I'm really glad that this coincidence happened, because I like to see that people still value this album as much as I do.

In fact, I have not liked Kanye more in recent years than I did after reading this post from Pigeons and Planes

So. My history with Kanye West. I saw the video for "Jesus Walks" at some point and paused for a moment on it because the beat was SO different from the other popular songs in hip-hop at the time. Then I saw him perform in the movie Dave Chappelle's Block Party and I really enjoyed that. And finally, the guy that I worked with at Perdue (who I believe I mentioned in the Carbon Leaf post) played this and also Late Registration (the follow-up to this) a lot and so finally (Amazon tells me) I bought it for my birthday in 2006. I think I probably bought both albums, but I don't think I'll check because this isn't about both albums. It's about this album.

This album finds KWest as a new rapper, but one with a number of years of experience as a producer. So he's made friends (Mod Def, Jay-Z, Ludacris, etc.) and has lots of fun production tricks.

The thing that finally sold me on this album is the beginning. An old man asks Kanye to sing a song that the kids can enjoy and so he starts "We Don't Care" by saying yeah he knows JUST the song. And then a chorus of kids comes in singing (with him), "Drug dealing just to get by/Stack your money till it gets sky high" and I have always (and will always) found that hilarious and irreverent. And it stays that way for the whole album. There are surprising turns of phrase and surprising points of view that keep this album fresh and enjoyable even into its second decade.

You can buy The College Dropout at Amazon, Amazon MP3, and iTunes
Posted by James! at 12:00 PM