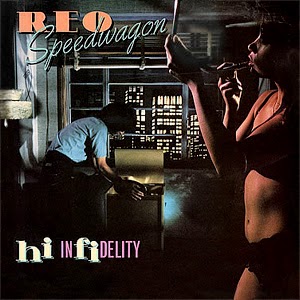 So in March/April of 1981, this album and the song featured were huge. The album spent 15 weeks at #1 and the song spent 1 week (but was replaced by Blondie's "Rapture", so I mean, it took what it could get.)

A couple of months later, "Keep On Loving You" was the 17th song ever played on MTV (Wikipedia has the full first day along with milestones and stuff HERE, because of course it does.) and the first song to have hit #1 on the Billboard Hot 100.

Watching it now, you definitely see how Video Killed the Radio star. Kevin Cronin is a great songwriter and a great singer, but he has the looks of a stereotypical 70's/80's college party movie nerd. And that's why the bands with the great songs but not attractive band members made way for bands like Duran Duran and Bon Jovi, who were more aesthetically pleasing.
Posted by James! at 10:00 AM